The lives of artists, chronicled in detail, are scrupulously studied by many to figure out the secret of unconventional success. Often, the takeaway is that rhythm and routine steadily walk their own path towards self-actualization. But then there are those genuine mavericks who simply make, who simply do, whose existence is simply art. Frederick Weston is one of these rare majestic people.  “I’m always doing something arty,” he says, “I always have my hands in!”

Some may call him a hoarder. Some may call him nuts—an admission Weston coyly baits. “I’m crazy, and I’m bringing my happy craziness to all the world,” he says.  Some simply may not know how to access or orient themselves around Weston’s mind: one that is always moving, always connecting, always producing. Weston now sits comfortably with the identity of an artist. “For me, even to be able to say I am an artist and I am a designer now, I feel like I've earned the right,” he said in his oral history transcript for the Archives of American Art in 2016.

It was around 1992 that the moniker stuck to describe what he had been doing. Weston does, in fact, create and produce artworks that are easily categorized as art, particularly in the mode of collage. “I have an addiction to the copy machine!” he exclaims, “so I’ve tried to make it no more than $5 or $10 a day.”  Weston goes to Fed-Ex Office every day to copy his collaged paper onto the actual materials of his works, a practice that could be likened to a painter going to the studio. “I was good yesterday,” he says as he laughs to himself, finding a Fed-Ex Office receipt for a mere $2.80. “I think if I ever have an art studio, it’s gonna be more like an office than a studio,” Weston says, “It’s really kinda my therapy, my own complete world.”

Weston also works out of his treasure-filled home, with ‘filled’ being the operative word. After Weston invited me to visit him in his Chelsea home-studio, I’d been warned by a few not to freak out at the number of objects, things, boxes, papers, and what-have-you. Instead of panic, I found a world belonging to a person who deeply values possessions and sees a use for them outside of mere consumption. “Hoarding is about ownership and attachment,” Weston tells me. “They really train us to be consumers.” Weston sees his collection as pushing back on the powers that be, living as one’s truest self, making something that lives on beyond a brief, fated lifecycle. “You just consume. You eat, you drink, you get stuff, you wear stuff, you use stuff, and you throw it away,” says Weston. Naturally, anything and everything is available in Weston’s mind to be incorporated into his art practice.

Weston isn’t a man who’s easily contained, but 2020 is slated to be a year where his boundless creativity will take to the stage. Weston’s year begins on January 10th, with a group show curated by his gallerist Sam Gordon. “Souls Grown Diaspora” at Tribeca’s apexart is a survey of African American artists born of the Great Migration who are crucial to contemporary art. Weston will also be showing work at Ace Hotel New York’s gallery, where he used to live when it was the Breslin Hotel. “Don’t call me Mr. Concierge!” exclaims Weston with a laugh. Next, Weston is sending a work about gay porn icon Tom Katt to a group show curated by artists Seth Bogart and Jess Scott at LA’s museum dedicated to the king of homosexual erotica, Tom of Finland. “The goofiest thing in the world is the penis,” he says in one of his observational theorems, or “isms” as he calls them. “We rule and slam people over the head with it. I’m telling you – religion and politics is all about big dicks.”

His busy year continues in March during Independent, when his gallery Gordon Robichaux is placing Weston in conversation with Matt Paweski. In addition to the collages, Weston’s practice includes installations with collected objects, trash and binders brimming with photocopied material. His photocopies serve as both a personal archive of his brain and a fantasy stage, where his characters – based on real friendships – have live-life narratives. Spend time with Weston’s work and you’ll get to know Claude, Butch, Tom Katt, Billy, and Michigan J Frog – who emerged as a symbol for the insult and injury that can be inflicted on those with a deep skin tone. “Everyone told me I was ugly, and everyone said Nina Simone and Miles Davis were ugly, because they were too dark,” he explains. And then there’s Sambo. “Sambo is pejorative, but I am Sambo, what the fuck.” Politics and pain are ever present in Weston’s dialogue. “My whole thing about race and sex is that it’s cock-eyed. But that means I get to take it apart, put it back together. Just like the copy machine.”

Weston doesn’t only express himself visually. During Printed Matter’s September book fair, Visual AIDS is releasing the next edition of their “Duets” book series: a conversation between Frederick Weston and Samuel R. Delany. “It’s crazy, it’s crazy, it’s crazy!” says Weston about a project particularly close to his heart. Visual AIDS, in fact, has directly prompted Weston’s focus to turn to the fine arts, and has spent 20 years archiving his work. The charitable organization provides care for people living with HIV/AIDS, a cause that he has long championed, and a condition he’s long lived with. “That was the best thing that could’ve happened,” he says. In fact, the same year “I first got the virus, in 1996,” Weston became involved with art and activism organization that’s still a part of his life and career now. When reflecting on his career, Weston tells me: “my most activism part was working with Visual AIDS. Going out and volunteering and helping with all the things they do.” Now, they’ve partnered together for an event during the “Souls Grown Diaspora” show at apexart. Weston’s journey to this moment encompasses his career but is also the stuff of legend, immersed in the most cherished and rupturing moments of recent history: Gay liberation, disco, the Downtown 500, HIV/AIDS. “We didn’t know what we were doing, we were deep in business, and didn’t have a penny to our name, but we managed to do it,” Weston says. 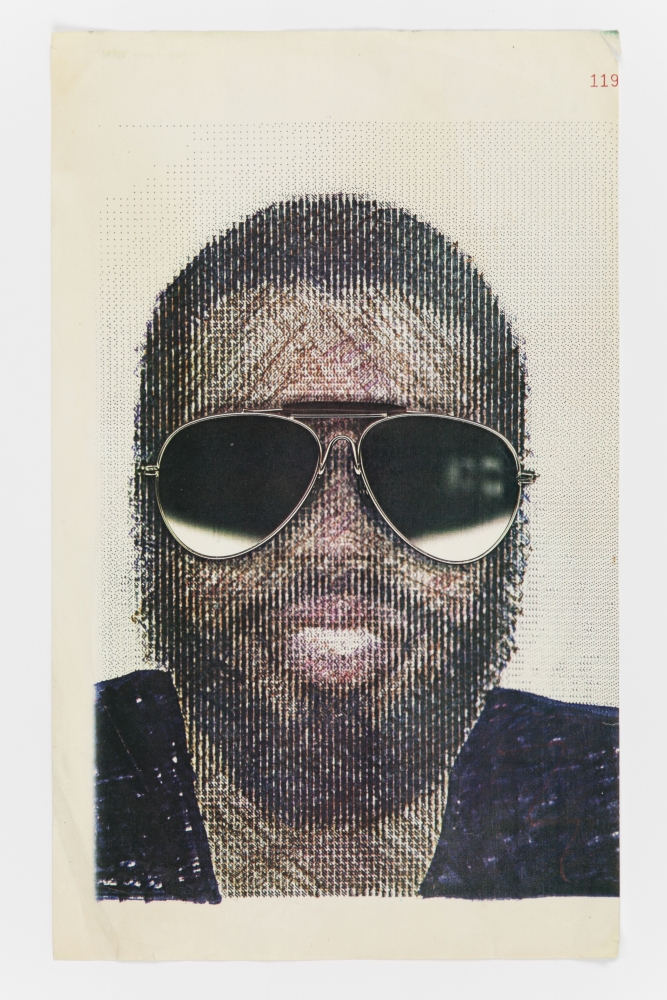 Weston is a Detroit kid through and through, he says. Raised in Motor City, a love child born in Memphis, to a woman who Weston has described as “my mother, a star.” She “touched a lot of people”, as he says. “People always commented on her appearance. Because I was born out of wedlock, it was important that she looked good and I was her best accessory,” Weston recalls. “I’m an only child, so I learned if I behaved, I could do things and people would take me places.” Weston and his mother were incredibly close – so much so, they used to send each other peonies—real, pressed, paper or fabric—to each other in the mail. Naturally, in homage to her, Weston turned a portrait of Freda into a college painting by affixing these floral mementos to the photograph, calling it ‘Freda with Pansies’.

It’s evident that Weston’s mama raised him right from the way he rattles off his astute reflections on people, social functioning and morality. But his mother’s indelible influence is through fashion: it was she who taught Weston to cut patterns and sew. Her mastery of the skill, mixed with her innate sense of style, often caused sensations – in fact, her wits around a sewing machine have become lore. “My mother copied couture—Dior couture, with a simplicity pattern, and she took big cabbage roses and made it a hat, and she stopped traffic on Sunday morning. Stopped traffic on a Sunday morning,” he emphasizes. “Imitation is the sincerest form of flattery, and copy is the most sincere form of imitation,” Weston says, positing an aphorism that underscores his practice. The language of dress has always been Weston’s purview, his entre.  “My whole thing is about fashion anyway,” and truly, it was through the industry that Weston created the life he’s lived. 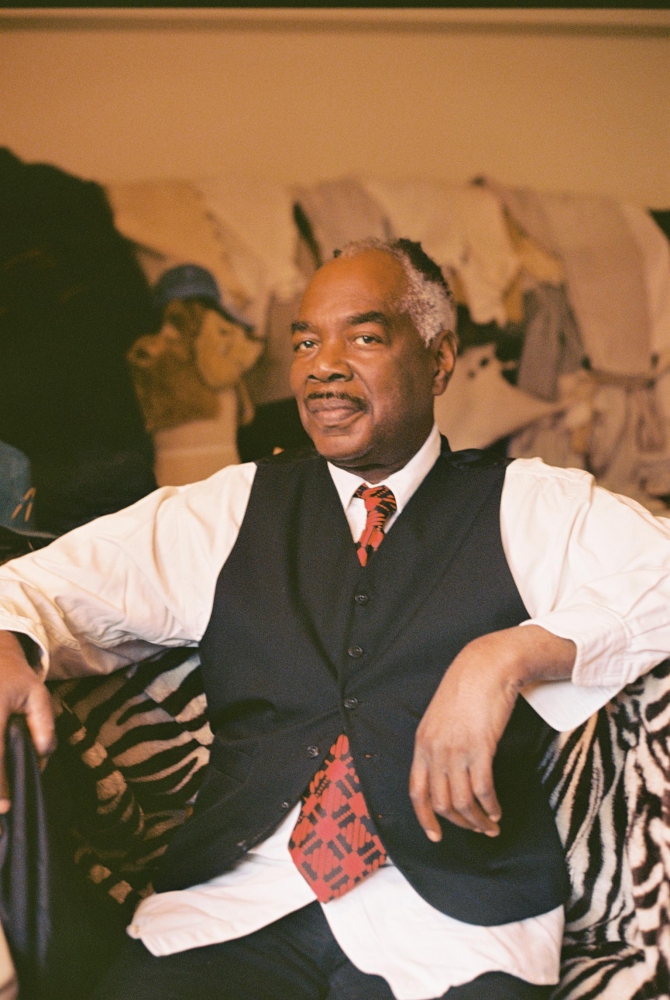 It wasn’t just his familial relationships that helped Weston develop into the creative he is now. It began in the famed Detroit music scene. “The black clubs were tired for us. What was more fun was to go to the white clubs and make them deal with us!” He says with a laugh, “What are you bringing to the party? I’m bringing my attitude.” Weston’s crew in school and college comprised of the same cool kids, like fashion designer Claude Payne, jazz singer Stephanie Crawford, model Billie Blair, who then all trekked to New York together in the 1970s. “I came here with a group of kids, my core group, we all lived together,” explains Weston. It was in NY that Weston and the Gang went out to clubs. Studio 54, 12th Floor, The Loft, The Saint, Paradise Garage: a scene legendary for not only the birth of disco music and gay culture, but where these kids from Detroit saw and were seen. Their crew caught the attention of the bold-faced names of that time, and they began their ascent in the fashion world. Claude worked for fellow African American designer Stephen Burrows, then broke out on his own. “Really when ‘black designers’ were the thing, he was the top four,” explains Weston, himself too in the game styling, merchandising, all of it.

“My whole practice really is about the way that men look, men comport themselves and the way that men pose,” Weston tells me. “What people wear are really where people’s heads are.” Essential within his practice, too, is his very own logic schema, a matrix of order, where his characters and their symbols send their messages through their coded presentations, especially in their outfits. Weston asks, “Do you know my fashion theory? There’s a situation, there’s you and your personality, how do you wear the outfit that’s gonna express your personality and yet cover all the bases for the context. So 12x12. Because 12 is the world.” In this schema, there are 12 modes: “Very formal, formal, semi-formal, informal, dressy, business, athletic, outdoor, casual, homewear, loungewear, intimates,” and three orders: “Life, work and leisure: life is the social aspect (formals), work (dress, business, athletic, outdoor), leisure (house, lounge, intimate).” Through a leap of faith and some fuzzy math, there are 144 combinations – but now, according to Weston, that’s expanded to 1440.  What this really means is that Weston’s matrix encompasses expression and presentation of self, which gets into the roots of being, existing. Isn’t that why we look to artists, really, and their lives in the first place? For now though, a glimpse into Weston’s world is a gentle embrace of the people and possessions that comprise of a life. In Weston’s case, that’s one full of love—of oneself and many others.